Not much sewing going on here lately. I managed to get some of Joanne at Thread Head's blocks sewn... 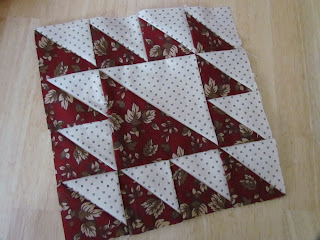 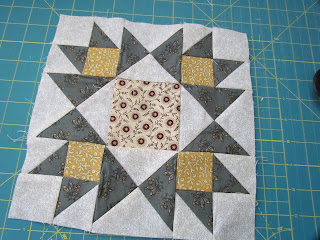 and to sew several scrappy log cabin blocks with some fabrics left from other projects... 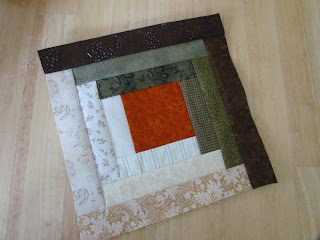 Scrappy log cabin block
1.5 inch strips, 3.5 inch center (measurements before sewing).
I think I will add another round to these.

before I was sidelined. Unfortunately, I have recently done more typing and minutes-taking than my body could handle (mind is still willing!). It's all in a day's work for an executive assistant. I don't like to be out of commission, but I am afraid it's what the doctor ordered for now. If I comply I will have many more years of pain-free sewing ahead. 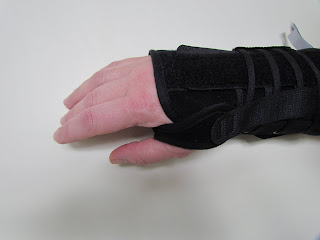 Meanwhile I am dreaming of starting this Irish Cabins quilt from American Patchwork and Quilting, April 2006. I am collecting fabrics for it (I can't sew much, but I can plan and collect!). I just fell in love with it when I saw Laurie Simpson's version here. 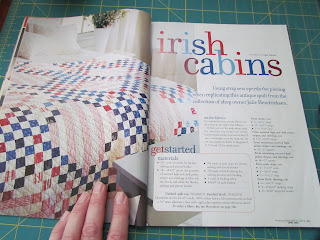 Have you heard about Denise Russart's sew along, Granny's Hankie? 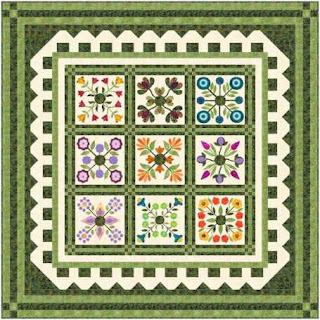 There are so many sew alongs going on, I had to share another.

So Many Quilt Alongs 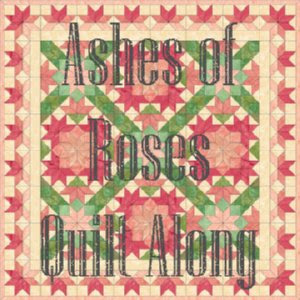 To be sure there are many quilt alongs beginning this month. Previous posts on this blog have identified Thread Head which began last Fall (it's never too late to begin this gorgeous quilt); Civil War Quilts where a weekly block is posted by Barbara Brackman; and The Lone Star quilt along by Lyn Brown.
If there is a shortage of new projects on your list perhaps consider one of these sew alongs (no affiliation):
Ashes of Roses Quilt Along by Ronda. Gorgeous. Love the different colorways. All of them. This quilt uses Inklingo products. I have been meaning to do a project using Inklingo. Hmmm.

Postage Stamp Quilt Along by Rachel. Classic. This would be lovely in any jelly roll you have on hand.

My Tweets by Erin. Saturated. The color and exquisite applique are enough to make your mouth water. Her instructions are detailed and seem to suit all levels.

A Cherry House Quilts Quilt Along by Cherri. Modern. Serene and edgy at the same time. I love the possibilities.

At this point I am resisting these, though not sure how long I'll be able to maintain this reserved state. There is something for everyone out there. I'd love to have 10 of me sewing on all of my projects at once...well, maybe not. My sewing space is not *that* big.

Here is a nice tote pattern, my pick of the week ~ I plan to sew one up tomorrow. Yes, I have the day off for my own sewing retreat. Now, to stay away from all other distractions...

Around these parts it's been 70 degrees on average this week. Yes, we have been experiencing above average temperatures for January to be sure. About a month ago I took the below photo at work while on my way to an event with camera in hand. Clearly, not long ago it was looking quite Fall-like. Just before the winter solstice there was rainfall that had the local meteorologist talking about records, trees falling, mudslides. It was a real mess. 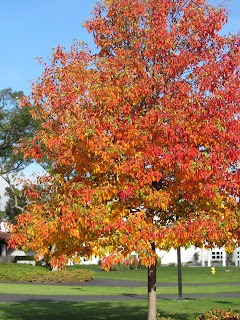 It's all quilting weather to me ~ surely you can relate.

I have been thinking about the Whig's Defeat block and fabric selection. Quilt historians in the Deep South Study group recount block history here. According to my research Whig's Defeat is also known as Grandmother's Engagement Ring, Fanny's Favorite, and Democrat's Fancy. Traditionally I believe red, white and blue were most often used. I have seen lovely versions in pink, green, cheddar and in red, green and cheddar. I am a fan of cheddar, so that's an easy one. I am still working on the other two colors. 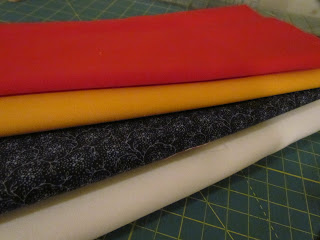 This is one stack I have been staring at:
Kona red, Kona papaya, an indigo print and parchment.
Not sure about this red with this indigo. I am going to create
a new stack and stare at it for a bit.
No worries though, while I have been thinking on the Whig's Defeat fabrics I have sewn. Below is a stack of nine patches in Moda's Shangri La (mostly) that will become a couch throw soon. 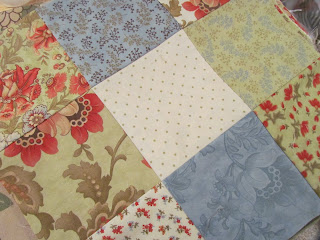 And there are always these Bonnie Hunter mystery blocks to work on. I have slowly made some progress on the quilt. It's a big one with many pieces. I am enjoying the journey with this quilt...in other words it could be a while. If you're partial to the pattern go now and save the files. It's free on her site for a limited time (June 1, 2011). 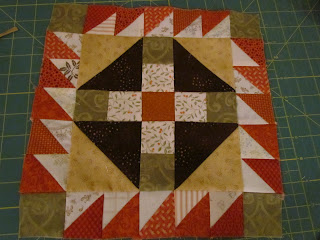 And more fabric choices to make. I have the below fabrics for the Joanne Thread Head Quilt Along alternate blocks. I am not sure if I like the plain muslin fabric with the tan and black prints or the shirting below with the small circles. Perhaps a tone on tone like Joanne's? Decisions, decisions! More fabric to think on. 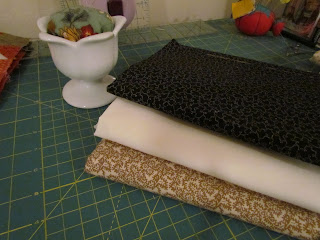 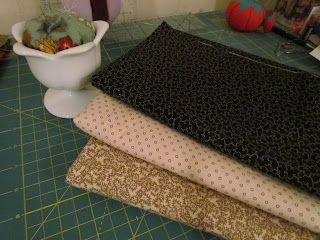 Of course I have been sewing along with Barbara Brackman too. No shortage of projects here. I have sewn the first two and am in progress on the third. It's applique and I am trying a new to me technique described here. Marcia Hohn prefers using freezer paper on the top of the piece to guide her needleturn. I thought 'Hmmm, it's worth a try.' It may not be the best method for pointy stars (?) but I want to try it. 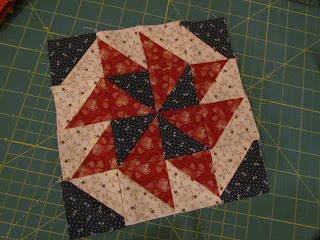 1 Catch Me If You Can 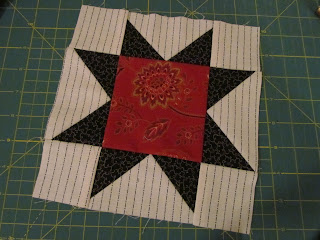 That is what's been keeping me busy lately aside from plenty of work.
I have determined that in 2011 I want use new to me techniques and take on challenging projects. So far it seems to be on track!
~~Lisa
Posted by Lisa at 6:22 PM 1 comment:

The new year is upon us. Mr. IQ and I had a quiet dinner out and met some friends for a drink too. I celebrated with a chilled Samuel Adams Winterfest followed by plenty of ice water with a twist of lime. Then we watched lots of festivities on television. It's the first time in many years I have stayed up until the stroke of midnight. Happy New Year!
Traditions ~ what folks do to ring in the new year has held my interest this year. I am amazed at the variety of activities people undertake while ringing in the new year. Of course, it's likely the most popular custom in the United States of America is to make resolutions. There is the Rose Parade in Pasadena, California which began in order to celebrate the orange crop ripening. Some people put coins in food for good fortune, consume blackeyed peas for good luck, eat doughnuts (the ring symbolizes coming full circle). In some cultures rice is lucky while in others cabbage (symbolizing paper currency) is eaten. We actually did have doughnuts. How did you celebrate?
New beginnings ~ did you know of Barbara Brackman's new blog to commemorate the anniversary of the start of the Civil War? I was not aware of this until her post today...hmmm, it appears I have a new project already, and it's only January 1. This adventure sounds like a lot of fun with great learning opportunities. Given the belief that the way you begin the year will color the rest of your year it sounds like a year of relaxation, starting new projects and working on current projects will characterize my 2011. Bring it on!
For most of the day I have been turning these pieces 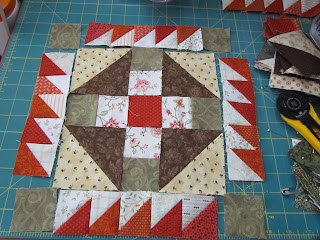 Pieces waiting to be pressed and assembled.
Bonnie K. Hunter's Roll Roll Cotton Boll mystery.
The mystery was finally revealed to its followers on Friday, December 31. 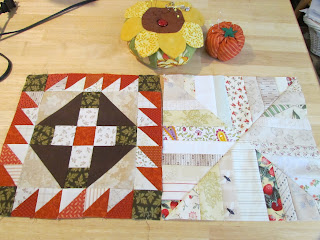 Though we did take the dogs on a walk in a light rain early this morning. How can we resist? 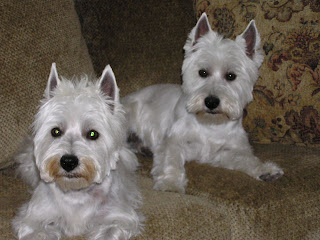 We have two westies, Madison (L) and Bozley (R).

Hope you have enjoyed 2011 so far. I certainly have.

Lisa
My first quilt, made in 1988, is a king-sized lover's knot in dusty mauve and forest green. Hands-down, my favorite aspect of quiltmaking is sharing it with others while teaching. I enjoy antique quilts for themselves, yes, but even more so for what quilts tell us about their makers.